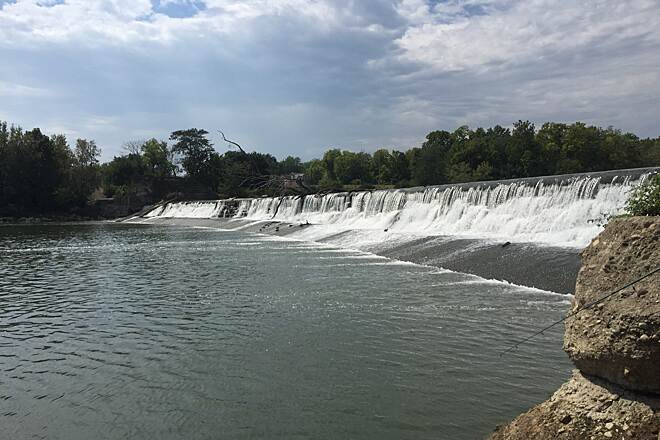 The White River Wapahani Trail is nearly 7 miles long, stretching from 38th Street at Riverside Regional Park south to W. Raymond Street. Near downtown Indianapolis, the trail provides access to White River State Park and the Indianapolis Zoo. With several more miles planned, it will eventually connect to a number of other trails.

Currently, it links with the Central Canal Towpath and the southern segment of the Fall Creek Trail. In the future, it will connect to the Eagle Creek Trail and the Pleasant Run Trail.

Downtown, trail-goers can easily reach the Indianapolis Cultural Trail at Washington Street, which stretches 8 miles through the city and spans five cultural districts with public art and numerous attractions. On the other end of town, trail users can also access the Monon Trail via the Towpath or a crosstown connection on St. Clair Street.

Some good, some bad, best view of downtown Indy.

Without a doubt, this trail is the location of some of the most scenic vantages of the Indianapolis skyline. From the Zoo at Washington to the bridge at 10 St is the most well kept portion of the trail. South of the Zoo at Washington, things can get sketchy real quick due to the White River basin and some blind turns causing hazard. Northbound @ 10th, you either hang a left over the bridge and loop back South (nice loop) or, you head right on the sidewalk in front of Eskinazi. This portion is unmarked and not intuitive, because the trail actually picks up again North of 10th on a suspension bridge just before the light at St Margaret’s drive. Go left (west) at the end of the bridge, (the right leg ends quickly at Indiana) and there is.a paved trail that continues north. Once you hit 16th, this path is adequately titled t”the nutcracker because it is very uneven all the way to where it connects to the towpath @

When I travel to Indianapolis on business, I typically ride this trail because it's easy to access from downtown hotels. This is my third time riding it and it seems to get worse each time I make the effort.

Today, the Washington Street Bridge was closed due to some zoo event so the part of the trail south of downtown was inaccessible. No problem, I thought. I'd just go north and catch the canal towpath at 30th Street and ride to Broad Ripple. Unfortunately, the trail was also closed north of 30th Street due to some sort of public works project.

In between, there are terrible road crossings at 10th and 16th. When I say terrible, I mean they are among the worst urban road crossings I've ever seen. There's nothing at all intuitive about the crossing at 10th. You have to know where to pick up the trail on the other side, and it requires riding along the road on a narrow, hemmed in path. It's awful. 16th is downright dangerous as traffic approaching from the west is basically blind to the trail. There's a flashing light warning motorists here, but few slow down. Exercise extreme caution crossing 16th Street.

There are some bright spots. The suspension bridge over Fall Creek is nice as is the catwalk just to the south of old Bush Stadium. The newer section south of the zoo is nice when the river is low, but when it floods it takes the city awhile to remove debris. The short cycletrack on 30th connecting to the canal towpath would also be nice but the city puts warning signs right in the bike lanes and the debris on the road here will cut a tire if you're not careful.

So I'm sorry, but I cannot recommend this trail. It has potential, but it is simply not enough to throw down some asphalt and stencil some bicycles on the pavement. What makes a trail great is the thought that goes into the design and the day to day execution. This trail is a long way from reaching its potential. Sorry, Indy.

We rode this trail on Townies, four of us. After only a few miles, we found ourselves dodging driftwood on the trail. The White River was very high and had obviously covered the trail recently and from the older eveidences of river swelling on the trail it evidently frequently covers the trail. There was a variety of scattered debris, rocks, tree limbs and most treacherous, mud bogs that were as much as two to three inches deep that crossed the trail side to side and ran for 25 -100 yards long in some places. We actually rode into one of these without suspecting after rounding a bend and my wife went down suffering a leg injury. Getting stopped was treacherous to say the least and exiting these mud bogs was very difficult without dropping our bikes and or ourselves.

There was a one point in the trail, a tree perhaps two and half feet in diameter was down across the trail with a rock wall on one side, the river and a mud bog on the other. Eventually we could not proceed any further so instead of finishing the ride we turned around and and eventually climbed a forty foot hill at 30 degrees, bikes and all, to get away from the trail. We had to negotiate a wooded area, a ton of broken glass and a horde of mosquitoes to boot.

I would not reccomend this trail to anyone. As an experinced trail rider, I found it to be the most ill maintained trail uoon which I have ever ridden. Avoid this trail!

Okay but a bit rough in places

Nice trail - we rode from link with Central Canal Towpath to downtown Indy - trail was a little rough in places due to roots under mining asphalt surface but other than that ok. Few road crossings not functional as you approach Indy and at one location you just run out of path and have to hunt the connection into Indy. Easy ride, no gradient and good connection to the Central Canal Towpath at the Naval Armory.

Nice trail that is clearly marked. It wasn't too difficult and only had a couple of areas where crossing was a little difficult, 10th street near IUPUI comes to mind, also the trail does kind of disappear there as it is not as clearly marked as it could be. Of course if you saw a map of the trail first this wouldn't be an issue.