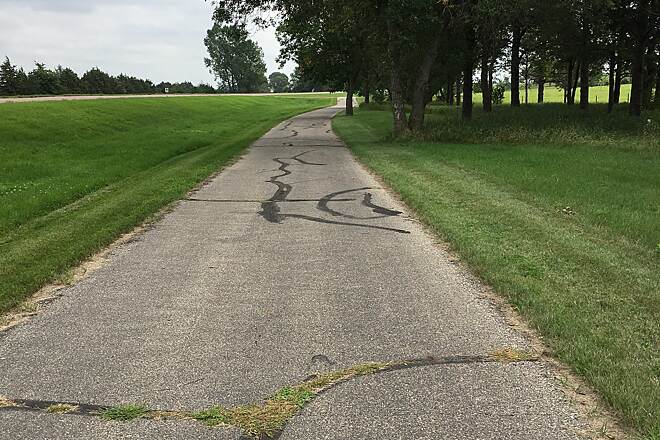 The Blue Loop is a key component in Watertown's system of paved, multi-use pathways, connecting a part of the city's Red Loop with the Orange Loop that encircles Lake Kampeska. A portion of the trail follows the former route of the Chicago and North Western Railroad, which played an integral part in the development of the area. Along its looping route, the trail passes through numerous parks and recreation sites, including Bramble Park, Riverside Park, Jackson Park, and Stokes-Thomas Lake City Park.

Across the ten-mile loop, trail users have the opportunity to experience a wide variety of environments, from the shady woods along the Big Sioux River, to the industrial sprawl as the trail turns into a sidepath along 4th Avenue, to the wide open fields as the trail approaches the lake to the northwest. You can even transport yourself to the savannahs of Africa or the jungles of the Amazon thanks to the nearby Bramble Park Zoo, which has an assortment of animals from around the world. The trail is composed of smooth asphalt, with benches placed sporadically to help give cyclists and pedestrians a place to catch their breath.

Note that the very northwestern end of the trail along S Lake Drive past Stokes-Thomas Park is a signed on-road segment that uses the shoulder along the western side of the road, before the separate paved path begins again at the junction with the Orange Loop. Additionally, from Riverside Park, a roughly mile-long spur leads east away from the main loop for trail users looking to make their way into downtown Watertown.

Parking and restrooms are available at numerous points along the trail, including at Bramble Park, located at 800 10th Street NW, as well as Riverside/McKinley Parks at the intersection of Kampeska Boulevard & W Kemp Avenue.

On the western side of the trail, parking and restrooms are available at Jackson Park on S Lake Drive, and Stokes-Thomas Lake City Park (90 S Lake Drive).