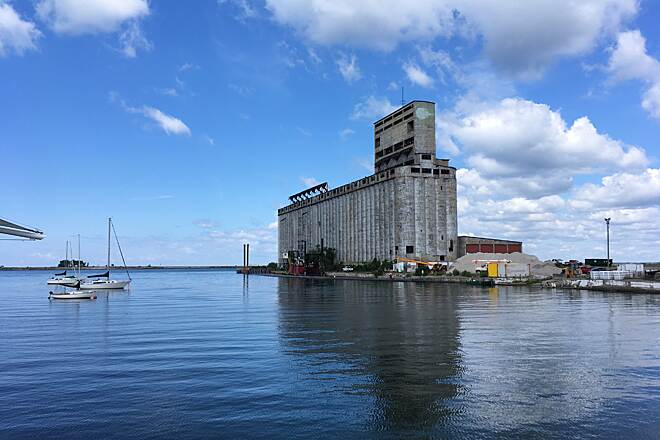 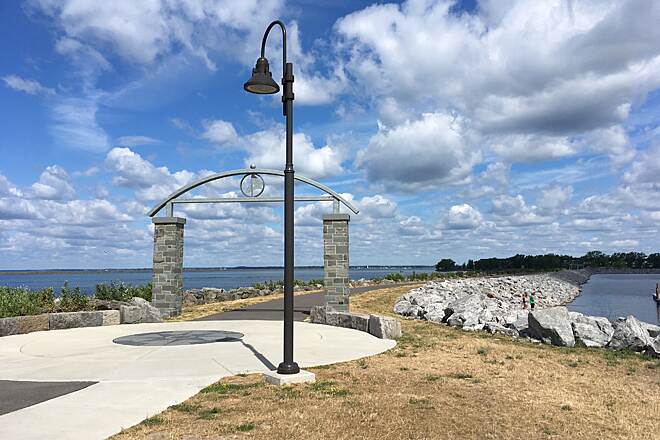 The Shoreline Trail in Erie County, New York, is 21.7 miles of flat, easy pathway that runs adjacent to Lake Erie, one of the country’s Great Lakes, on its southern half and then along the Niagara River on its northern half. The trail traverses the west end of Buffalo and is located just south of the famed Niagara Falls and near the Canadian border. It ends in Tonawanda, where you can pick up two more trails for more riding: the Two Mile Creek Greenway and the Tonawanda Rails to Trails.

The trail is paved throughout its entire length, making it wheelchair accessible. The large number of parking lots located near the trail the make it one that can be hiked or biked in its entirety as well as in sections. Numerous trailside parks also provide helpful amenities, such as restrooms, drinking water and picnic areas. Although part of the route runs adjacent to I-190, fencing and a wide grassy median keep the trail experience safe and pleasant.

The northernmost parking lot is located in Niawanda Park (200 Niagara St., Tonawanda). Several miles south, just before the Isle View Park, is another lot with room for about 20 cars. Just south of this lot is another lot with an even larger amount of spaces available. On the western side of Unity Island Park, which the trail passes through, there is a small round lot with room for about 15 cars. La Salle Park, which is located off the Niagara Thruway on Porter Avenue, offers a large parking lot as well. The southernmost parking lot is located a couple hundred feet south of where Fuhrmann Boulevard and Outerharbor drive meet, with room for around 25 cars.

excellent trail. they have updated the pavements, but be careful the trail has moved once you get in buffalo.

This trail was in absolutely beautiful condition, very smooth and great scenery.

There is a section of the trail like others have mentioned going through Niawanda Park that is very beautiful but then a lot of the little connecting trails take you through parts of town that is under construction and the roads are god awful.

right next to highway

We thought this trail wasn’t good at all. The trail through niawanda park is great but going towards the city you are biking next to the thruway and takes you into the industrial area of tonawanda, and there is no view of the water. This is a one and done for us.

Buffalo can get a bad rap, but this is nice trail along the shoreline and then into town. We did it Labor Day on a perfect day and could not believe how nice Buffalo has been upgraded. Obviously you got to catch good weather which can be a challenge there, but was worth the ride.

Great trail - if it weren't for the closures

My wife and I visited Buffalo from our home town 2.5 hours away on Sep. 1, 2019 with the primary purpose of riding this trail. I can't say the ride was worth the car trip. We started at the northern end of the trail in Tonawanda . For the first few miles, it went right along the Niagara River, with beautiful views. Then it moved inland and went through an industrial area, but it was still interesting, at least to an engineer like me. At Sheridan Dr, we encountered the first disappointment. A sign said the trail was closed ahead. We checked, and it was indeed definitely closed off with a chain link fence. One small sign indicated a detour, but it seemed to point to the entrance ramp of I-190, where another sign said bicycles forbidden, as expected! Fortunately, a local cyclist passing by pointed us to the correct detour on River Rd, which was quite unattractive. Shortly after returning to the trail via an overpass over I-190, another closure sent us again on inland streets. Finally, we came up to a third closure on Niagara St. just before Unity Island. This time, there was not even a sign indicating a detour. We had had enough with the closures and the ugly city streets, so we just turned around and rode back to our starting point. This will be a much better trail when the closures are eliminated, and it would be a 5-start trail if more of it went along the river. The real gem would be extending it north to the Falls, which at present, can only be reached via a maize of city streets. (We tried, but got lost and gave up.)

Nice trail along the lake and into Buffalo. But busy in weekends.

Nice trail along the lake and into Buffalo. But busy in weekends.

Nice trail except for three sections that were closed due to construction, and gated due to only being open certain hours. We rode on a sunday morning. No alternate route offered for construction section of bike path. I would think weekends are when people ride bikes not sure why sections are gated shut then. The neighborhoods in those sections were sketchy.

My family started on the trail at the Tift street entrance and biked up to Canalside stop. (Note: the $1 bike ferry over to Canalside opens Memorial Day and runs for the summer and part of the fall).

The path was a great surface the whole distance. There were several times where we had to stop before crossing the street, but it was clear that where it was possible trail planners had limited the number of stops cyclists would have to make.

I was most impressed by the level of thought that must have been put into the design of the trail and surroundings. There were sections that were sidewalk, wooden sections as if on a dock, and portions with different paving stones. Along the trail were a variety of bench styles and many historical signs and a bird sanctuary. It was clear that significant thought had been put into making it a visually interesting and appealing ride (and it was!). There was also an amazing playground en route that our toddler loved which was icing on the cake!

Was passing thru so decided to do this trail. I started at the Buffalo Harbor State Park (was planning to start further south -- trail end at Lackawana but decided I did not want to leave my car in the parking lot. Filled with lots of stuff since I was in the middle of a seven day road trip). From the State Park parking lot I managed to get into and thru downtown Buffalo. Had planned to go all the way to the end, but got to a part of the trail that appeared to be on poorly maintained sidewalks thru a sketchy neighborhood, so gave up. I did bike all the way to trail end in Lackawana and noted a sign that said "Be Safe, Walk with a Friend" which explains why I did not want to leave my car there. The view of the Peace Bridge was nice, but overall I don't recommend this trail

Nice apshalt trail along Niagara River. Portion of trail does go along the 190 which is a heavily traveled thruway, so that portion can be a bit noisy. The trail does pass thru many parks along the way which makes for nice rest areas. At the Black Rock neighborhood in Buffalo have the option to take a asphalt trail that takes you to Delaware Park, which is an Olmsted park. Also have option to go off trail at numerous spots in Tonawanda and Buffalo. Most of the trail is off road except for short portion in Black Rock, near the inner harbor, and between the inner and outer harbor. When get to inner harbor have the option to take bike ferry across from inner to outer harbor, believe cost $1. Only reason gave 4 stars is because of portion near thruway and few sections bit bumpy.