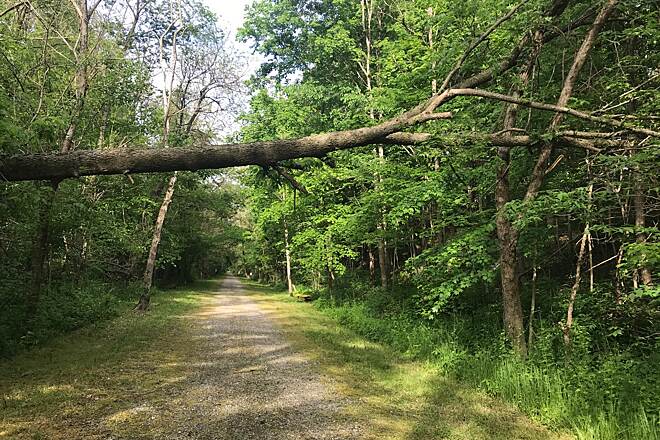 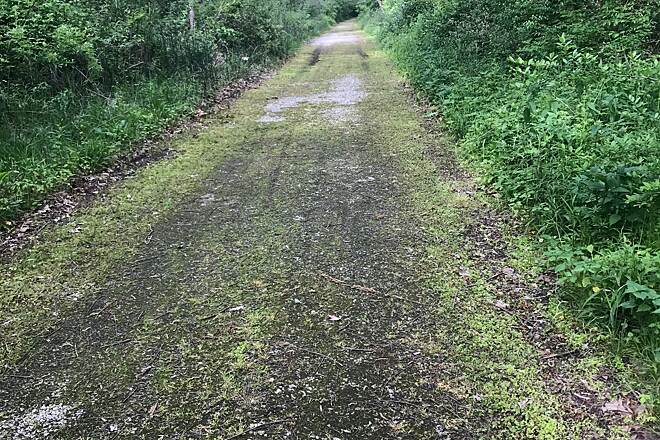 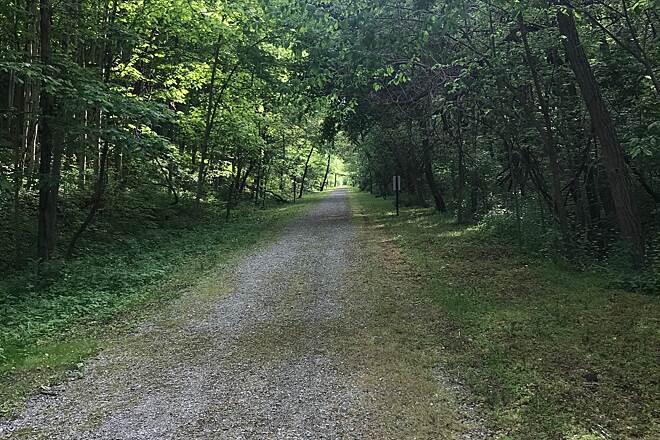 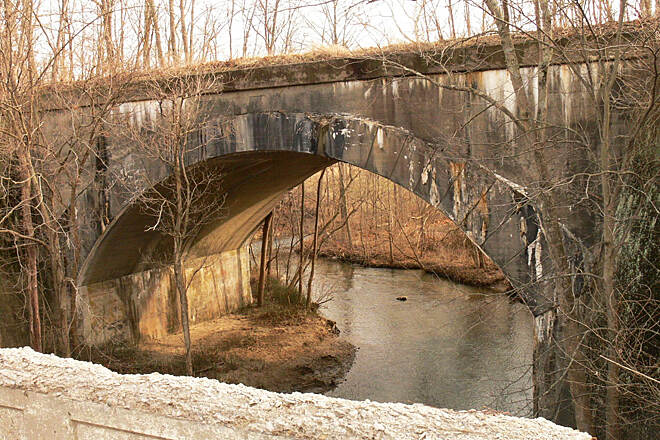 The Henry County segment of the National Road Heritage Trail runs for 8 miles over two segments. One runs from Big Blue River in Raysville east to SR 3 west of Dunreith (4 miles); the other between S County Road 225 W east to Williams Street in Lewisville (4.2 miles). The traverses a mostly rural landscape with access to the three towns.

The National Road Heritage Trail is part of a proposed border-to-border trail, stretching between Terre Haute and Richmond, Indiana, which will eventually span more than 150 miles. The trail occupies part of the former Pennsylvania Railroad corridor, which closely parallels the Historic National Road.

Another segment of the trail passes through Terre Haute. In Greencastle the People Pathways forms a segment of the National Road Heritage Trail. Through Indianapolis and Greenfield it's part of the Pennsy Trail. In Hendricks and Putnam counties, the route is called the Vandalia Trail.

In Raysville parking is available where the trail crosses West Street. In Lewisville park at Williams Street just east of the treatment plant.

Unpaved however lots of wildlife can be seen. Had to come to Lewisville to get on because couldn’t find access pint in raysville. Insects are out so if you go bring bud spray. Over all nice morning bike ride

I found this trail after looking for alternatives to the Pennsy Trail in Greenfield, IN for my daily power walks. The Raysville trailhead is a little difficult to find and parking places are limited (4-5 cars), the trail itself is very scenic and quite underutilized! I am often the only person using it, despite its winding behind many residences and running parallel to US 40. It runs through a heavily wooded area, and stays nice and cool even during the heat of summer.

The downside of this trail is that there always seems to be trees that are leaning dangerously or have fallen onto it. The ground on the south side of the trail is a little swampy, and all it takes to topple a weak tree is one good windstorm or a heavy coating of ice. For runners or walkers, there are also places where the gravel is sparse, leaving slick and muddy spots that could cause a fall.

The trail's quiet state may change soon, however. The last time I used it (early Feb 2016), the underbrush and trees had been cleared west of the trailhead, so it appears that the trail going toward the town of Knightstown is under development. This will take it over some of the outstanding railroad bridges that dot Henry county and along the edge of Knightstown. This may motivate more of the town's residents to begin walking or biking the trail.

These two trail segments are very much "works in progress." They are split by the little town of Dunreith, Indiana (FYI - The Flamingo Motel on IN-3 just north of US-40 is an EXCELLENT layover... Very reasonable rates and a great homestyle diner adjacent). East of Dunreith, the 3-mile trail segment from Lewisville west is VERY rough, and is VERY difficult to bicycle on... SO rough, in fact, that this is the first time I have EVER not ridden back on the trail, but on the berm of adjacent US-40 (The National Road). It's 4-lane, and it's safe and smooth. The trail is only very loosely "paved" with scattered "large" (like 1/2-inch) gravel. The westernmost end of the east trail gets somewhat smoother, with more grass and dirt base, and less gravel. Until 1980, this was the modern, all double-track, Pennsylvania Railroad "Panhandle Main Line," or, as the railroad called it, their "Main Line - Pittsburgh to Saint Louis." One lonely and inconspicuous token of that glory remains, 0.4mi. east of the west end of this eastern trail segment. The little tin shed in the corn field, on the north side of the trail at that point, is a Union Switch & Signal (Swissvale, PA) CTC (Centralized Traffic Control) remote control box, once an integral part of Dunreith Tower's 22 miles of control system of this railroad, which ran from Jacksons and West Dunreith. Pennsy's "Raceway" hosted famous PRR trains like the "Spirit of Saint Louis" and the "Saint Louisan" until Amtrak in 1971, then until late 1979 Amtrak's New York to Kansas City "National Limited." Soon after that, Conrail just couldn't abandon this line fast enough, moving its trains up to the paralleling ex-New York Central "Big 4" route. You will note scattered 4-arm telegraph poles on the north side of the right-of-way, and 2-arm (one long and one very short) poles on the south side. The 4-arm line hosted all of the communication and signal lines between the dispatchers, towers, and trains, and that 2-arm line held the wiring for the cab signals, which provided a constant display of the exact current track conditions shown on the classic ex-Pennsy trackside position light signals. Incidentally, track speed limits out here were 75mph for passenger trains, and 50 for freight trains (Faster than I-70's speed limit today!) And you can BET that trains ran a LOT faster than 75, too! This was some GREAT railroad! Now what we'll call the "Dunreith-West" trail segment is a little smoother, and much more rideable. This one flattens out US-40 and the landscape's "dive" into Knightstown with some impressive cuts and fills. Sadly, all of the fills, and most of the impressive spans that carried the railroad (and what could have been AWESOME trail segments above street level in Knightstown) have been removed. A couple of impressive and beautiful concrete arches from 1910 still provide a ghostly presence in Knightstown. This trail segment is a much more shaded "tree tunnel", very reminiscent of our mountainous Western PA terrain... A very beautiful ride. Now, as on the "Dunreith-East" trail, there is one lone remnant of that ex-Pennsy glory. 0.8 miles east of the Raysville trailhead, one bullet-battered and door-less, but still solid, US&S signal relay case remains in place, on the south side of the trail. I had long looked forward to getting out here and riding these trails, and the heritage they bear witness to makes this a most priceless preservation! As for the future, I saw several graders parked on the right-of-way east of these two trails, and they slowly continue to connect these trail segments across the state as part of the National Road Heritage Trail. It should be one awesome ride! Finally, on this trail set, which spanned 11am to 3:30pm last Sunday, I encountered not one single, solitary trail user! This has happened to me only twice in my 5 years of trail riding, the other occasion being two weeks ago up on the trail north from Corry, PA! -Rich Ballash, Latrobe PA